A Little Background of Toraja Land Upgraded  roads, an  airport  and  several  star-rated  hotels have opened the Toraja high-lands  to  visitors of  all  interests,  budgets  and  schedules. The  essence of the Toraja  beliefs  and  way  of  life  can be  experienced without  undue effort, as  many interesting sites are clustered around the town of Rantepao,easily accesible by road. 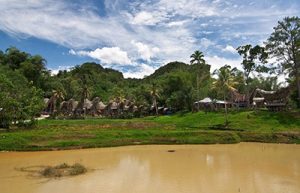 A  few  minutes from Rantepao, artisans at  Kete Kesu, a  model Toraja settelments, produce  bamboo  carvings  and other  traditional  handicrafts. The village itself has several well-maintained Tongkonan houses and rice barns. Visitors unsure about the propriety  of  tramping  around  someone’s  village  will  be relieved to know that Kete Kesu  has  been  converted  into  a  living  museum  with  the  express  purpose  of displaying Toraja  architecture and  daily life. Other villages  within sight of the roads, often sitting in an emerald sea of ricefields, display the Toraja penchant for baroque architectural adornment. If the Toraja way of life is interesting, the way of death is a fascinating mix of rituals custom and spectacle. For the Toraja, the dead are as much a part of society as the living. At Lemo, cliffs  rise  precipitously  from  the  ricefields  like  stonework condominiums. crypts carved with prodigious manual labor high into the solid rock  house the mortal remains of Toraja nobility. Set amongst the crypts, the striking tau-tau, wooden effigies representing the deceased, look impassively on the world below.

At Londa, a network of coffin-filled caves reaches deep into the limestone hills. Visitors expecting a solemn, well-kept grotto are often shocked and disturbed by skeletons tumbling out of wooden coffins, skulls and bones arranged , to western eyes, according to some gruesome aesthetic. But the Toraja feels that since their  ancestor’s souls are residing in heaven, ensuring continued fertility in farm and field, it is appropriate that their earthly ramains be on display for the pleasure of honored foreign guests. While the valley between Rantepao and Makale provides a glimpse of Toraja life, the real Toraja lies in the surrounding mountains, accesible only on foot. In treks ranging from an easy day to a strenuous week, those with a moderate capacity for adventurecan experience authentic Toraja village life in charming mountain hamlets. Even in the most remote mountain villages, visitors are welcomed openly. Long accustomed to foreigners stumbling unannounced into their settlements, village leaders will generally allow anobody to take a look the interior part of their houses.

The dramatic saddle-shaped roofs of Toraja Tongkonan houses are popularly considered to represent the prows of the ships that brought the original TORAJA across the sea and up to Sa’dan river to a new moutain homeland. Tongkonan houses remain centers of TORAJA ritual and community life. The size and style of ornamentation of these houses indicate the family’s social status, though increasingly the family and surrounding community perceive that status differently. 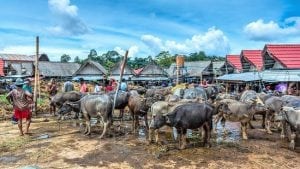 Toraja Weekly market is one of the most unique traditional market in Indonesia. It held once in every six days in several place in Toraja. The most colorful and biggest one is Rantepao weekly market. There are hundreds of water buffaloes and pigs are on sale. Toraja boast the only place in the world where people give water buffalo highest value. The price of the best water buffalo in Toraja is now  about 15.000 US Dollar.

Market is the real place to know Indonesian in their daily life. The costume, the products for sale and the interaction among people.

How we arrange your Toraja Tour: