Exploring The Area of Yogyakarta with IndoGlobal Adventure

Yogyakarta, together with its twin city Surakarta (Solo), is the cradle of civilization on Java. This city was the seat of power that produced the magnificent temples of Borobudur and Prambanan in the 8th and 9th century and the new powerful Mataram kingdom of the 16th and 17th century.
Yogyakarta was known with the slogan of “Jogja The Never ending Asia“ for its endless appeals. Today, it is also renowned as “ Jogja Istimewa “, a tagline that elaborates its special values.

This city is one of the foremost cultural centers of Indonesia. From strolling through the living museum of The Kraton or The Keraton (Sultan’s Palace), to hanging out at the famous Alun Alun, to watching silversmiths produce amazing jewelry at Kotagede and maybe try a splurge shopping up at Malioboro road.
Chasing sunrise in famous Borobudur Temple in the neighboring town of Magelang or magnificent sunset at Prambanan Temple, are only some of the many more ways to never get bored in this relatively small yet bustling city.

Bellow is several option for your 1 Day Yogyakarta Tour. 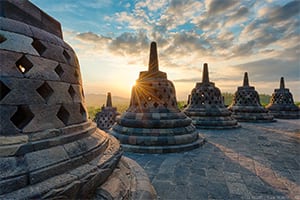 Day 1: Arrival Jogjakarta – Borobudur Tour
Upon arrival at Yogyakarta Airport or our Railway Station , our guide and driver will welcome you. Then they will take you to visit the biggest Buddhist temple in Indonesia even in the world. At Borobudur temple and on the way stop by Mendut and Pawon temple. Having lunch at the local restourant before you check in at hotel in Yogya and stay overnight.

Day 2: Jogjakarta City Tour – Airport
After breafast at hotel the proceed to Sultan Palace ( KRATON ),exploring TAMAN SARI ( Water Caste ) and Bird Market. Lunch would be served at Local restourant. Return to hotel to check out. Leaving from hotel drive to see Batik and Silver Industries and continue to visit PRAMBANAN as the highest Hindu temple in Indonesia before we transfer you to Yogyakarta Airport, Railway Station or return to your accommodation in Yogyakarta.